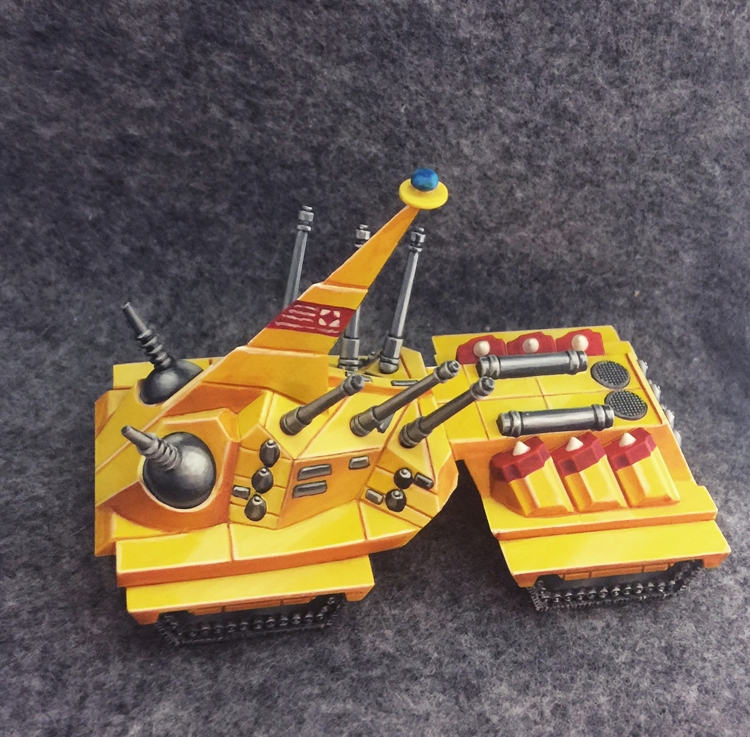 As promised here’s a tutorial for the upcoming plastic Ogre miniatures range. 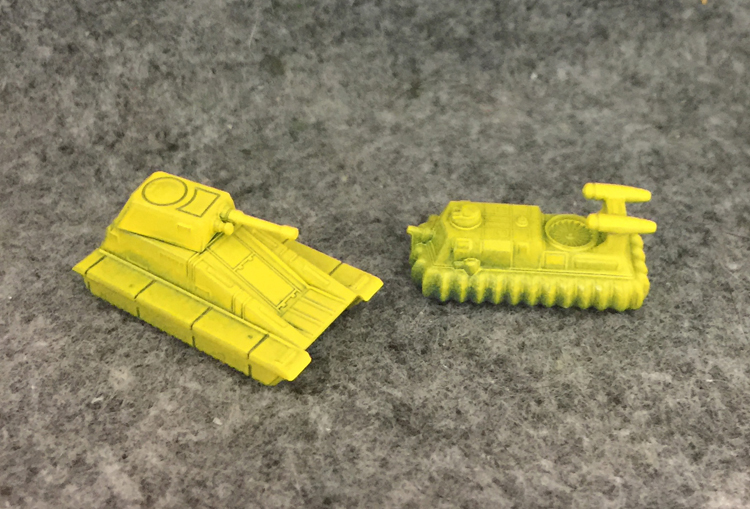 I’m going to start off by  being completely candid. Yellow is a miserable color. I mean it must be to make itself so insufferably hard to paint. I knew this going in, but I thought a yellow Ogre would just be so dang spiffy I had to try and paint one anyway.

In the way of preparation I actually went out and bought some yellow primer. Usually I go with a base gray for everything, but yellow being yellow I knew I could use all the help I could get. I always use Tamiya spray primers because after years of trying various brands, this is the only one that consistently sprays evenly and never obscures detail. 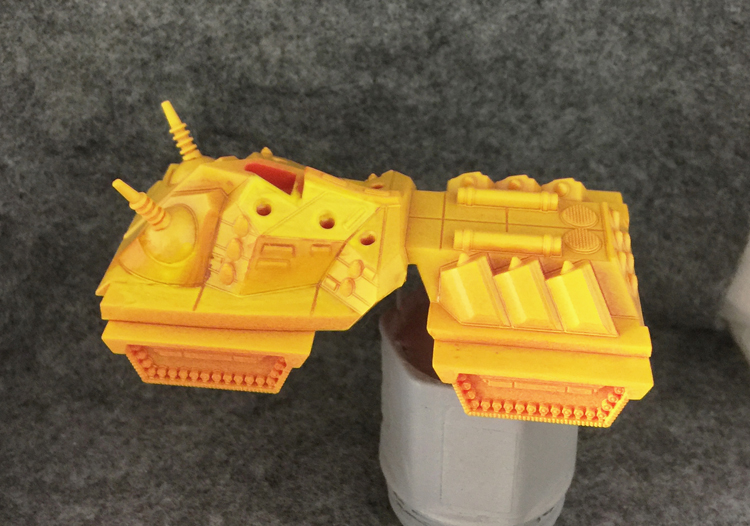 Here are the first stages with the Ogre itself. I wanted to replicate the almost unnaturally clean feel with this Ogre that I achieved with the red ones. Getting this effect involves emphasizing the geometry of the various panels that create the Ogre. The panels on the top need to be brighter to imply a light source. The panels along the side need to be darker to give the appearance of shadow. Of course flat colors alone aren’t enough to make it really pop. I want a nice smoothly blended gradient on each individual panel to really bring out it’s Ogre-y-ness.

Starting with the sides I’m doing a transition of Cygnus Yellow near the bottom blending in some small amounts of Bloodstone as I move upwards towards the top. On the top panels I’m using more of that Cygnus Yellow blended into Menoth White Highlight. You’ll notice that everything still looks a little splotchy. I’ll need several layers to get everything nice and even. These are Formula P3 colors as are all the ones I’ll be using.

You may also have noticed the thing isn’t fully assembled. Well it’s much easier to get to every surface when those gun barrels and tower aren’t in the way. They’ll be attached when the time is right. 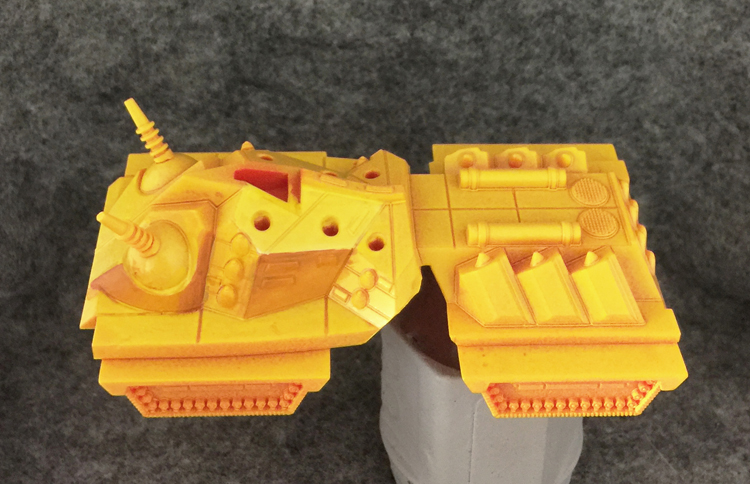 Here I’ve repeated the same step atop the previous layer to clean it up and give it more definition. The gradients on the side and top are starting to look more distinct now. 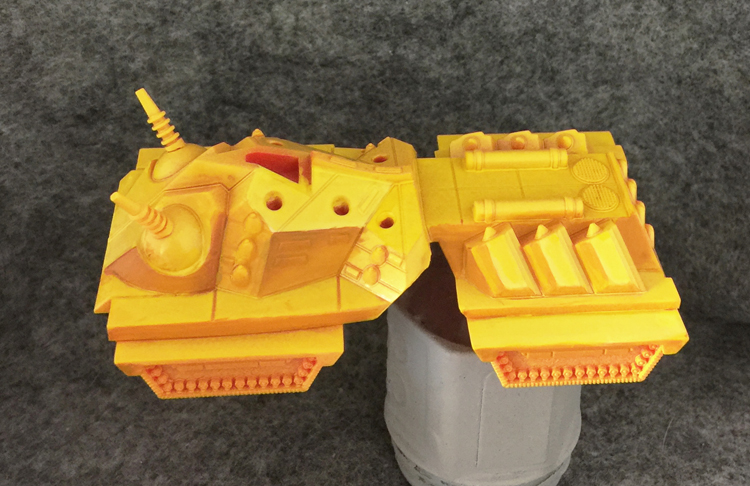 Here I’ve added more layers in the front section. I’ve also begun on the back now, including some work on the missile bays.

I’ve added even more definition now. I’ve also started on the flat subsection and the tops of the tread housings using the same lighter palette of Cygnus Yellow to Menoth White Highlight. If you look closely you’ll see that the yellow gets lighter towards the middle then blends back into a more pure yellow as it continues. The thin flat sides are a mix of Bloodstone and Cygnus Yellow. They’re just a little too small to bother with blending.

The final step for the yellow is defining all the lines. There is only one way to do this: very carefully. Each little groove gets a thin line of Bloodstone down the middle of it. This is followed by a thin line of pure Menoth White highlight on the lip above the line for extra definition. Every edge on the model also gets a thin line of white to help define every shape. 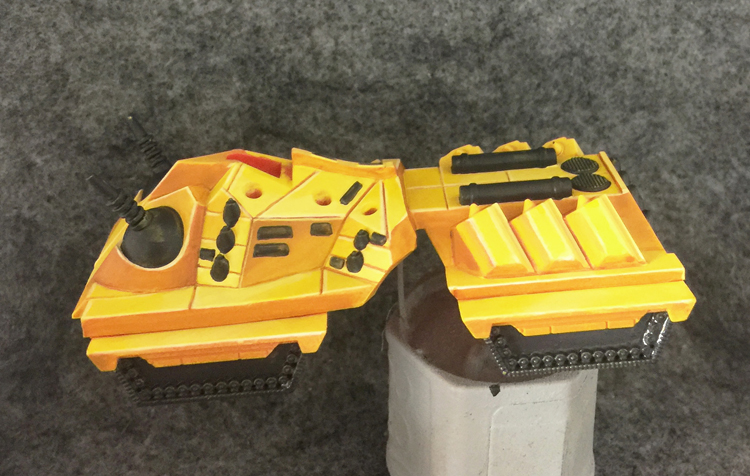 A few lines needed just a little more definition. With that finished I moved on to the next step. I wanted to make a lot of the details more metallic looking. I started out these small details with a basecoat mixed from equal parts Umbral Umber and Traitor Blue.

Obviously on a real military vehicle everything gets sprayed down with the same paint at the factory. Painting a nice looking model is really more about making the thing look cool than it is about realism though. Besides this thing is bright yellow so a lot of realism has been thrown out the door now.

This is when things started to get really tricky. Any mistakes (and I made a few) would have to be painted back over again with yellow. You’ve already seen how many coats it took to get an even appearance over a basecoat that was already yellow. Touching the yellow up over a dark color like this takes even more coats. This is why I don’t recommend painting anything yellow unless you just can’t help yourself. 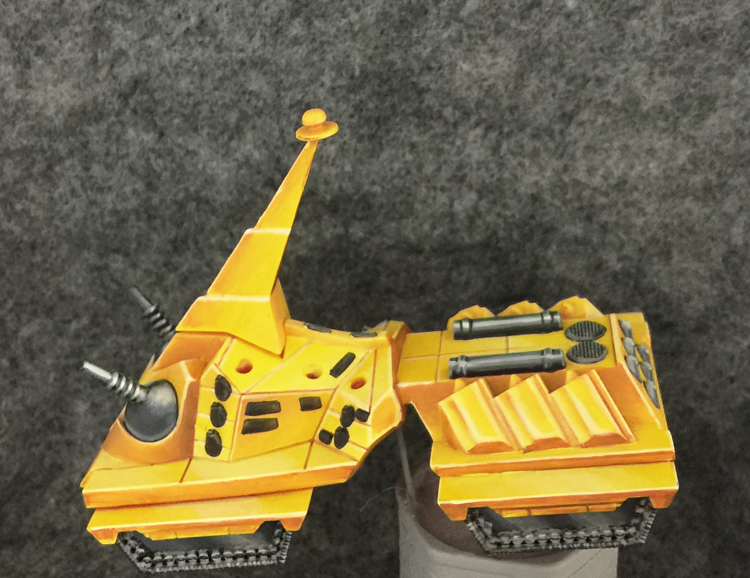 For the next step I wet blended the dark blue/gray base color up into Underbelly Blue which then got a thin streak of highlight down the middle with Menoth White highlight. Many people will just use a gray scale palette for “non-metallic” metal effects like these. Adding in some color like these blues will help make it pop. This whole step was performed in one go while the paint was still wet. this makes it pretty tricky to get a good wip shot unfortunately.

Getting a good metal feel is all about contrast: pushing the range of light to dark as far as you can. Compare the range of values on the “metal” areas to those on the rest of the tank. On the metals the darks are much darker and the lights just a bit brighter. The highlights also have a narrower range which implies reflected light.

Here are two gradient swatches to help show my point. In the one on the right, the gradient runs darker and the highlight is more narrow. this gives it a more reflective appearance.

Here’s the same idea applied to an orb. I used the one on the right as a template for the fore turrets on the Ogre. Note that the orb also has a bit of reflected light along the bottom. It has a tan tone to represent reflected earth. I added a similar line on the turrets to represent them reflecting the nearby hull.

Now I’m adding more definition to the smaller areas. Even the smallest panels need some blending work to help get that metallic feel. I’m also adding little lines of highlight to the wheels to help pick them all out.

I attached, but did not glue the Secondary Batteries to the back to make sure the highlights went in the proper place. 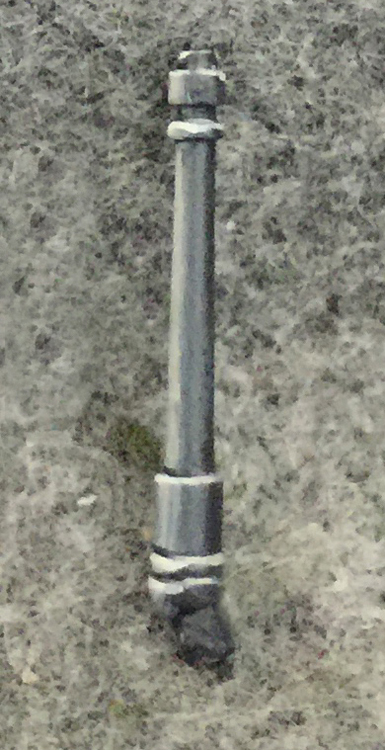 When I removed them to finish them up, they looked like the one on the left. Next, each segment got a little line of highlight as shown in the middle. Then I added a dark line to further define each segment. 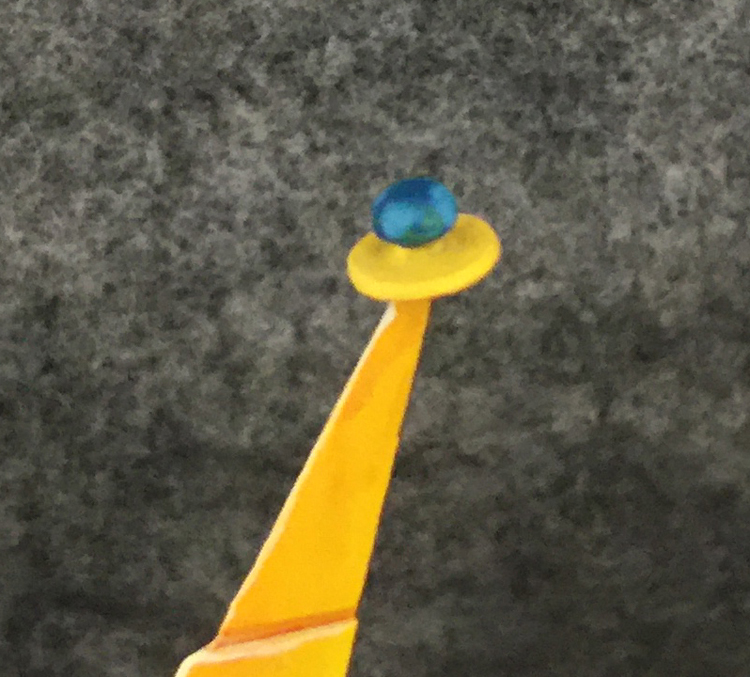 The primary sensor array was painted in a similar manner as the main battery turrets. The colors used here were Cygnar Blue highlighted with Frostbite. Looking at it now it seems a little lackluster. I may have to go back and add a little more to it at some point. Maybe some sharper highlights to make it feel more reflective…

With the Secondary Batteries in place this thing is really starting to take shape. The next step was adding some red accents with Sanguine Highlight on the missile batteries and on the central tower.

Red, like yellow, can also me a little irritating to paint, so it took a second coat to even it out. I also added some highlight lines to the missile batteries with Khador Red Base.

I wanted to add a little more detailing to the tower so I started with a white square.

I painted over the interior of the square to create this mysterious symbol. Is this the icon of some future nation-state that has yet to be formed? Maybe it’s the logo of a corporation that saw an Ogre as a necessary investment to protect it’s assets. 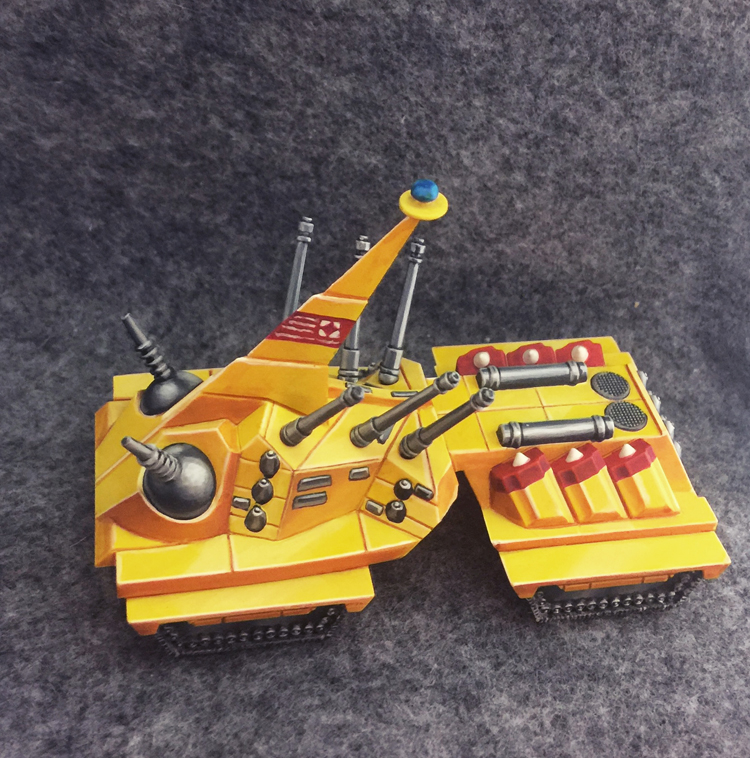 The last thing I did was paint the missiles themselves with pure Menoth White Highlight.

~Hope you guys enjoyed it! The next Ogre painting article will involve show a much easier method that also gets pretty good results.

8 thoughts on “Painting a Yellow Ogre for Steve Jackson Games”