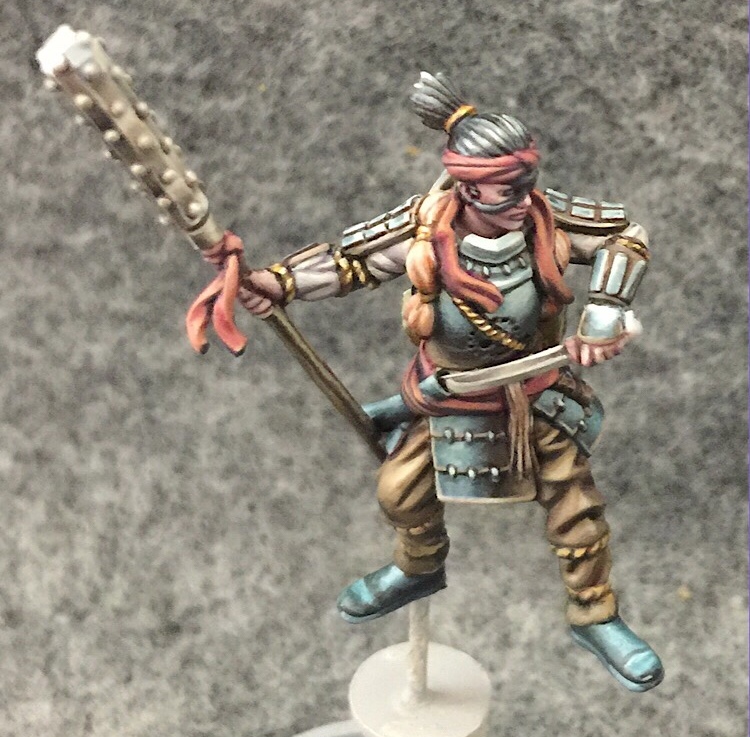 Here is the last Aya article! 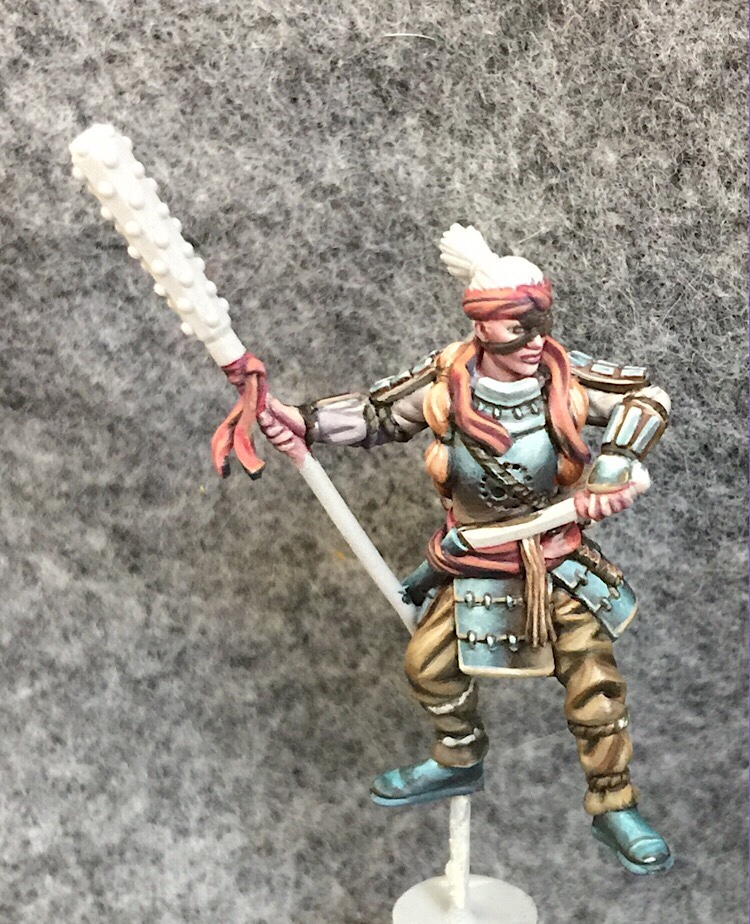 Here’s where I left off yesterday as I was finishing up her orange rice-transporting sash. 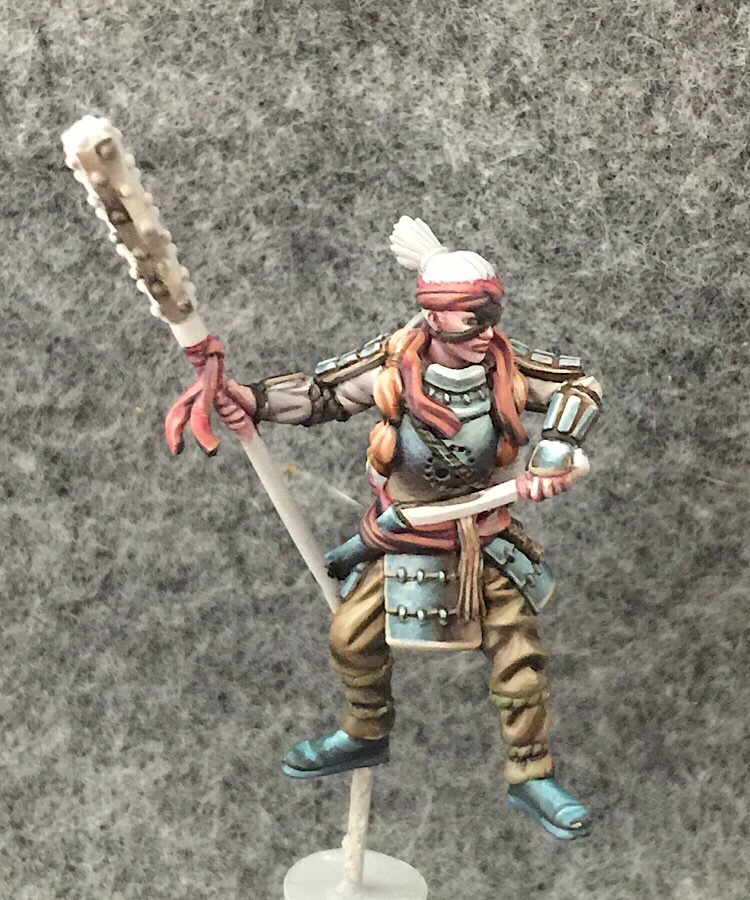 I started work on the Tetsubo with a series of gradients along each side to try to give it a shiny look. I went with some warm grays here. The darkest color used was the warm black mentioned in the last 2 articles. This was blended into Trollblood Highlight (again this is a pinkish gray rather than the bluish color one might associate with Privateer Press’s Trollbloods) which was then blended into Menoth White Highlight in alternating bands. Not all sides of the Tetsubo are identical. Some are darker as they would be in shadow. For these sides of the Tetsubo, no Menoth White Highlight is used. On the lighter sides which face upward a lot less black is used. 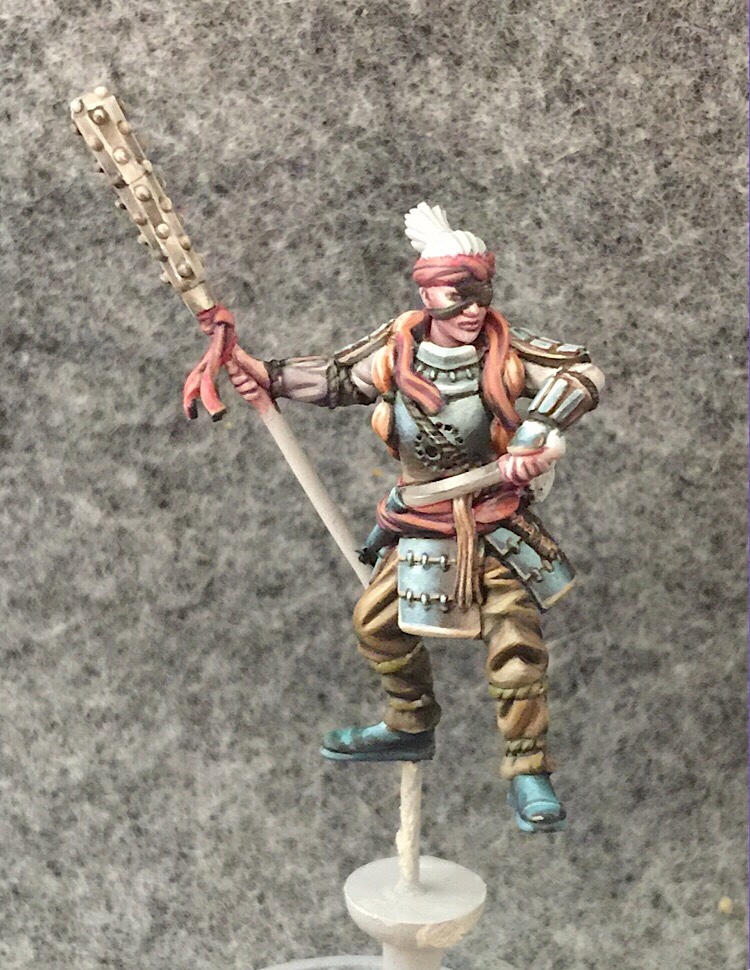 Each edge of the tetsubo gets a thin line of highlight, then each stud is picked out with watered-down warm red. I also added a bit of shading to each of the studs, although I didn’t take quite as much time with them as I could have. There are 30 studs on Aya’s tetsubo alone, not to mention the rest of the force. 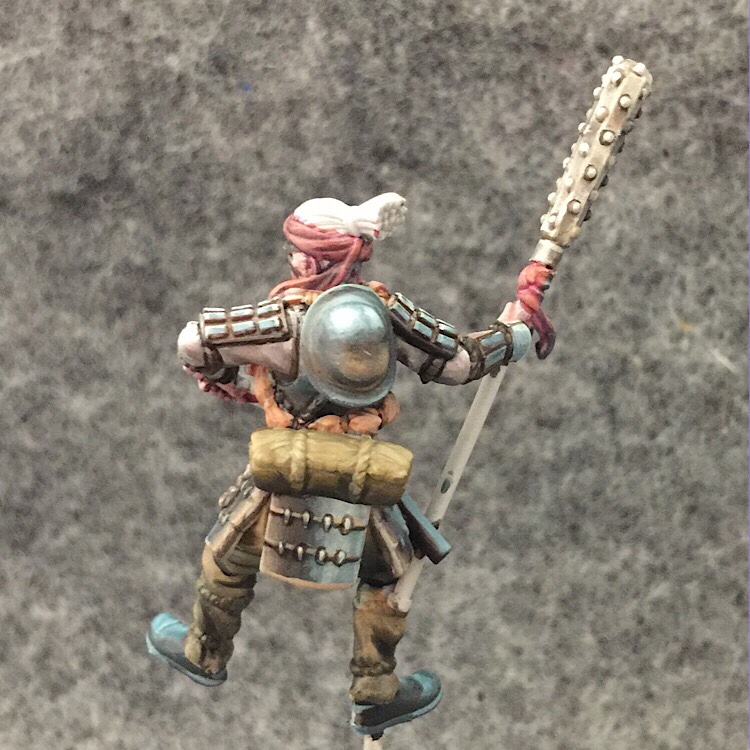 One of the few details left at this point was her bed-roll. I painted this with P3 Traitor Green, highlighted with Ryn Flesh and shaded with a mix of Exile Blue and Umbral Umber. 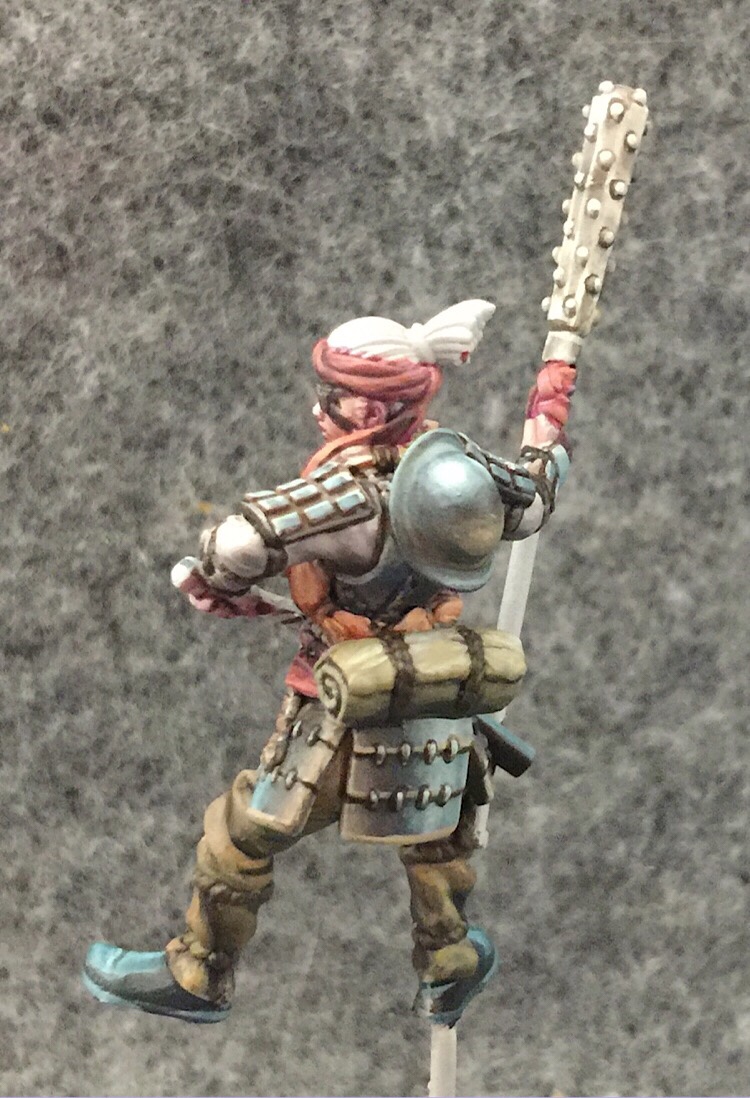 Here it’s a little more cleaned up. The ropes have been painted brown to give them some definition before I begin adding highlights. 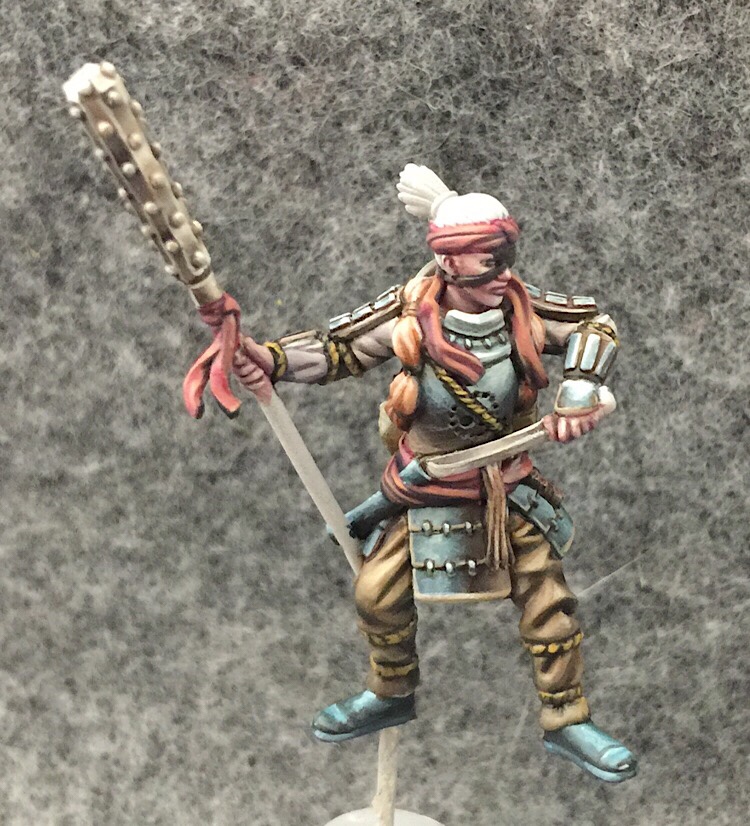 I carefully pick out each segment of rope with GW Averland Sunset. 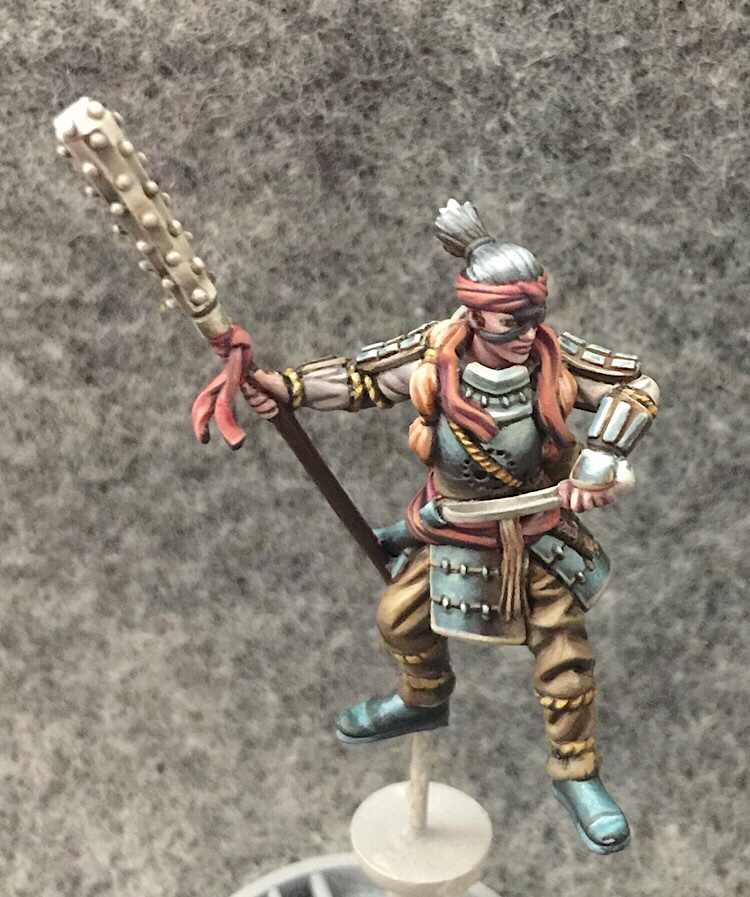 Then its on to the hair. Before defining each strand of hair, I highlight and shade the general area. The colors are actually very similar to the armor with the warm black being used for the darkest color. It’s highlighted with Gravedigger Denim, then Menoth White Highlight. 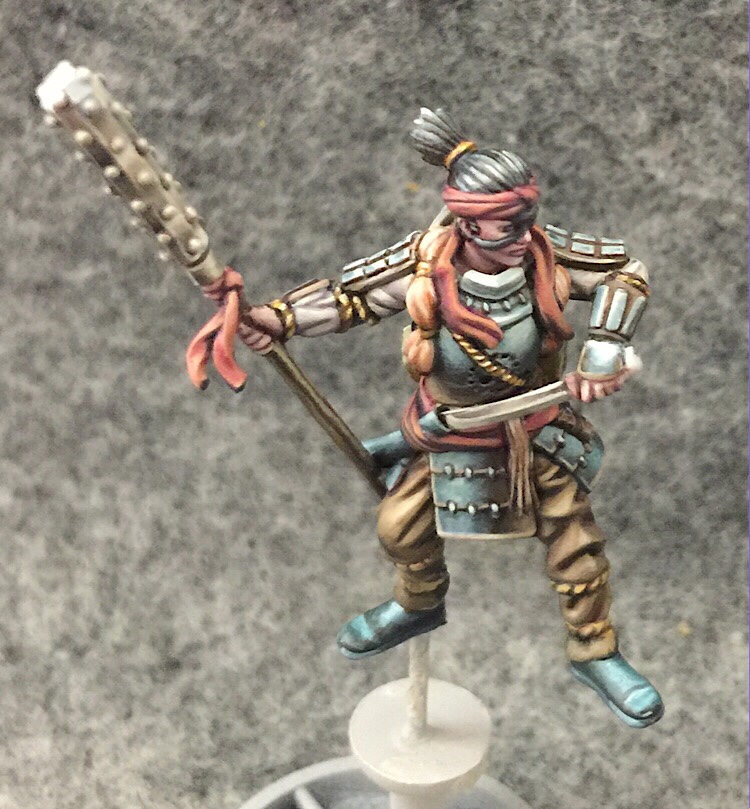 Then I define each strand of hair with thinned down warm black. 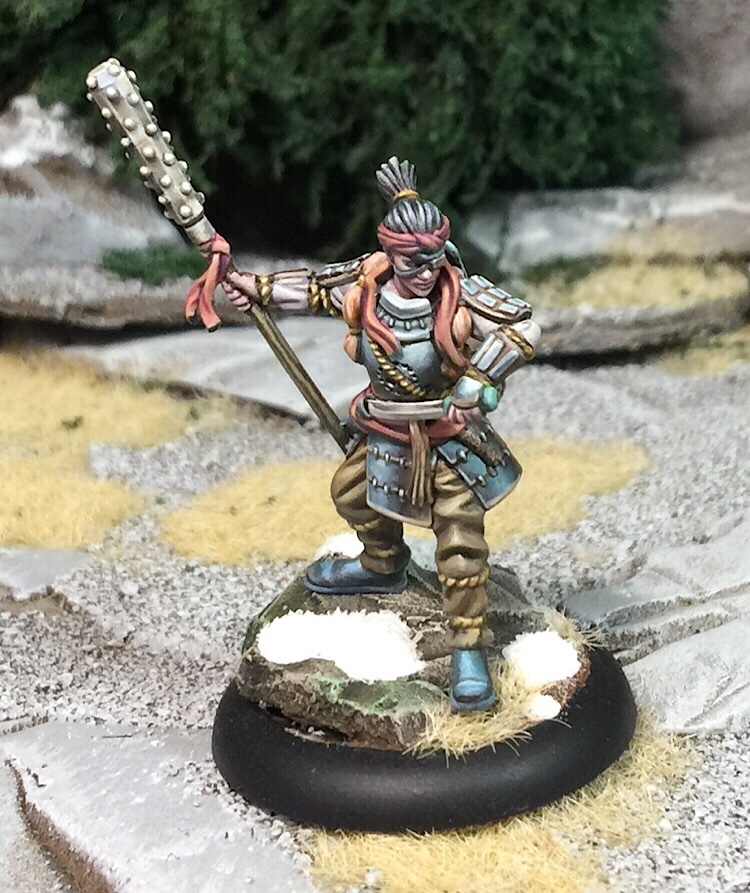 I realized I still hadn’t done the handle of the knife. It was Caliban Green highlighted (as always) with Menoth White Highlight. I also finally painted that tiny white spot on her foot I’d kept overlooking.

The stones on the bases were carved out of blue insulating foam. I bought a sheet several years ago for a project and it seems like I’ll have enough to last forever. The snow is Gale Force 9. It’s another product I’ve had around for years although that’s because I use snow so rarely. I make a paste with it with some white glue and white paint. After dabbing it on I sprinkle some of the dry snow over it while it’s still wet.

~Hope you enjoyed the article. Not sure what I’ll have to show off next week.